This post probably won’t reveal you anything you didn’t already know, but you should read it anyway and, maybe, share it with your loved ones: no matter if you plan to download my new app Tasktic or even if you don’t care about what that is or why I made a task manager when many alternatives already exist, the stuff we’re going to talk about matters a lot for every app you start using or online service you subscribe to, and not everybody knows it.

In today’s world, you can expect an app or an online service to have one of the following business models:

As you know, the frequency of the models listed above changes widely depending on the category of app you consider:

Many business models, one main difference: the product for sale can actually be the app or service itself, or it can be the user. By now, chances are you already know that if you’re not paying for the product, you are the product. 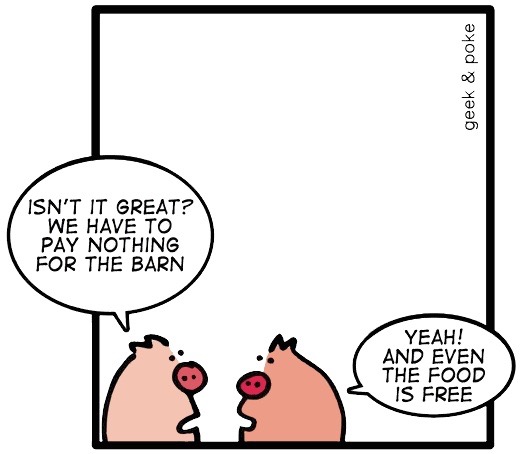 How does this recap of the most common revenue models for apps and online services relate to task management / GTD apps in general and with my own app Tasktic in particular?

Approach #1: you pay upfront for the app, usually quite a sum. 30 / 40 bucks is not an unusual price (in some cases you have to make separate purchases for every kind of device you want to use the app on, spending even more) and, while this isn’t much IRL, sadly for developers it is Ferrari-price in the App Store. If you go down this route, you’ll have a probably good (and in a couple of cases even great) app that you couldn’t try before buying, and you will be lighter of a significant amount of 💵. This isn’t the cheap approach, but it’s a good one if you’re willing to pay the price. Another upside, in this case, is that there’s a very high chance that since you paid, you and your data are not the product. I love the paid upfront model made in a serious way (meaning: if the user paid you good money, there’s no way in the world that you get her data while syncing and then sell it), and most developers do it just right, asking prices that are adequate for excellent apps targeted to power users. We can’t deny, though, that such prices are a huge barrier for discovery, especially for regular users who don’t know (yet) how useful a task manager can be. Not everybody is a power user, but everyone has things to do and can use a little help staying organized and focused, so a less expensive solution is very much needed.

Approach **#**2: you don’t pay at all. Since I’m not aware of a major free GTD app that is ad supported, the free tag price means that you are not paying for the product directly in any way. Congratulations, dear friend: this is a textbook case in which it’s very likely that you are the product. This might be a less expensive solution, it’s actually free and free is good, but I personally don’t believe is a safe one for anybody. Maybe you think your data will be alright and private because the app or service is from a heavily-fundend start-up with noble ideas, but what happens to your informations and metadata if the founders decide that they really need the private island I mentioned above and therefore sell their company to SomeEvilConglomerate?

Approach **#**3: you can download and use the app for free, but you can subscribe to a pro, fully-featured version for a monthly / yearly fee. This is a very common model these days. I must admit that as a user I’m OK with this approach, but I don’t love it: recurring revenue is great for the creator as it can support steady development over time, but the customer needs to be aware that she’s going to pay a small amount for a very long time, if she likes the app, probably ending up spending more than in a single transaction as in the case described in the approach #1 above. On top of that, some users aren’t often aware of what happens to their data when they decide to let the subscription expire: will the data be completely accessible, editable and exportable? From the moment the subscription expires, is it ok for the app creator or service provider to use data saved by the users, while they were paying, for data-mining and commercial purposes? You guessed my opinion, no, it’s never ok, but how many persons do you know who carefully read the Terms and Conditions to check that’s the case before they start using a service?

Approach **#**4: you can download and use the app without spending any money upfront, but to unlock its full potential you can pay a single in-app purchase, spending a clear, final amount once to get access to the features you want forever. As a user, this is my favorite model for every kind of app (not just productivity, but also games… oh, videogames were so much better when people actually paid for them upfront instead of rewarding developers for adding thousands of pain points as incentive for micro-transactions, but I’m digressing…), and is also the one I, as a developer, chose for my new app Tasktic. I love this approach because you can try as many apps as you’d like, until you find the perfect one that fits exactly your needs, but I also like it because it is not a trial in the old, shareware-like sense: the free app doesn’t expire after a certain amount of time, instead it must provide real value in order to compel the most passionate users to want “more” and therefore pay for the full, most advanced version. I, for one and after many years of discussions in the development community, applaude Apple for not allowing trials in the App Store: the audience there is so broad and diverse that you can’t expect everyone to understand exactly the limits of a trial version (risking people to input data into apps that stop working after a few days), but it’s very simple to understand that a free app is providing certain functionalities and will keep having them forever, and that if you want more, or if you really enjoy the product and intend to support its future growth, you can pay for it. Of course, there are cases where you need to show the user how a complex functionality actually works and that are therefore better suited for time-limited trials that give access to all the features the app can offer. This isn’t common on iOS, but it can still be achieved in free apps with IAP: for instance, Marco Arment allowed a brief “demo” of Smart Speed and Voice Boost in version 1 of his awesome podcatcher Overcast, before moving to a different, highly innovative model, patronage (I sadly don’t have much time to comment on this new model of support - this is already going to be a long post - except for saying that it looks really promising and that I, as many other developers, look forward to know from Marco Arment how this “experiment” will work for him).

Having stated my preference for free apps with a single, non-recurring IAP, I also have to say that users who look at apps built around this business model should also be inquisitive about two more aspects :

Even before I began developing Tasktic last February, I wanted my new app’s business model to reflect my beliefs as user:

Is well known that being free is a necessity if you want a lot of people to try your app and, maybe, love it and use it every day in their busy lives. But after all that I’ve written about free products, let me be crystal clear on my purpose in making Tasktic available for free: my hope is to “lure” a lot of users into installing Tasktic and, after trying it out and evaluating if its features and design pattern fit their needs, maybe pay to unlock it’s more powerful features. My goal as a developer is to convert free users to Pro users, I want to be completely straightforward on this. You want developers to be straightforward on this.

Having said that, I hope a lot of people will buy the Pro versions of Tasktic when it launches in a few days, but I know that there’s a certain number of users who will like the app, but are never going to pay. This is fine by me, I intend to preserve the trust of those free users no less than of the paying customers; I can’t be sure I won’t change anything in Tasktic business model in the future, after seeing how the launch goes (I’m talking specifically about iAd in the free version). But this won’t change: users’ data, even if they don’t pay a dime, belong to them. The pillars upon which Tasktic is built are, and forever will be, 1. only you can access your own data and 2. your data syncs exclusively via iCloud (again, only accessible by you).

If you got this far, chances are you care about privacy and data protection, and you’re absolutely right because, as I said at the beginning of this long post, this stuff matters a lot. I hope you’ll think about it, in the future, when you download any app or subscribe to an online service: always, always look for the business model!
I also hope that you’ll consider giving Tasktic a try when it launches on the App Store, next November 5. It’s free, you know? And it keeps your privacy safe. Also, it’s fanTasktic because I made it with love and I’m better at app development than at puns like this. But, most important, I ask you to consider sharing this post with people you care about, but that you know aren’t always as tech-savvy as you are: they won’t like you implied they’re not tech experts, but they can use these informations to make better, safer choices.